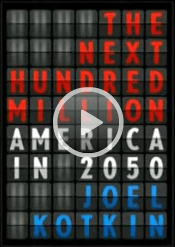 On May 18, 2010, geographer Joel Kotkin was interviewed on the Charlie Rose Show, discussing his new book The Next Hundred Million: America in 2050 (The Penguin Press). This book envisions what America will look like 40 years from now when America grows in population from 300-million to 400-million.

Written from a geographer’s perspective (Charlie Rose’ first question is, “What does a geographer do?”), Kotkin takes an optimistic look forward based on the strengths of the American ideal and practical nature of the “millennials” (the generation born between 1983-2003, larger than the baby-boomers). Regarding trouble-spots, Kotkin stated that issues surrounding class (e.g., a growing gap between income and education levels) will be our most prominent challenges in the coming decade. Particularly Kotkin notes, we’re doing a bad job of preparing the 50-70% of kids who don’t go to college for skilled professions (i.e., vocational training) that produce good paying jobs on which you can raise a family. Kotkin asserts, “Basically we’re telling our kids, you either become a lawyer or a brain surgeon, you work at Target, or you deal drugs.” His book takes the perspective that there are other paths for us to focus on to narrow that gap and increase productivity. His overall perspective is positive and speaks of optimism and faith.

Joel Kotkin is a scholar on urban development, currently a fellow at Chapman University in Orange, CA and the Legatum Institute, a London-based think-tank. A highly respected speaker and futurist, he consults for many leading economic development organizations, private companies, regions and cities. (thanks to S. Frost for this link)