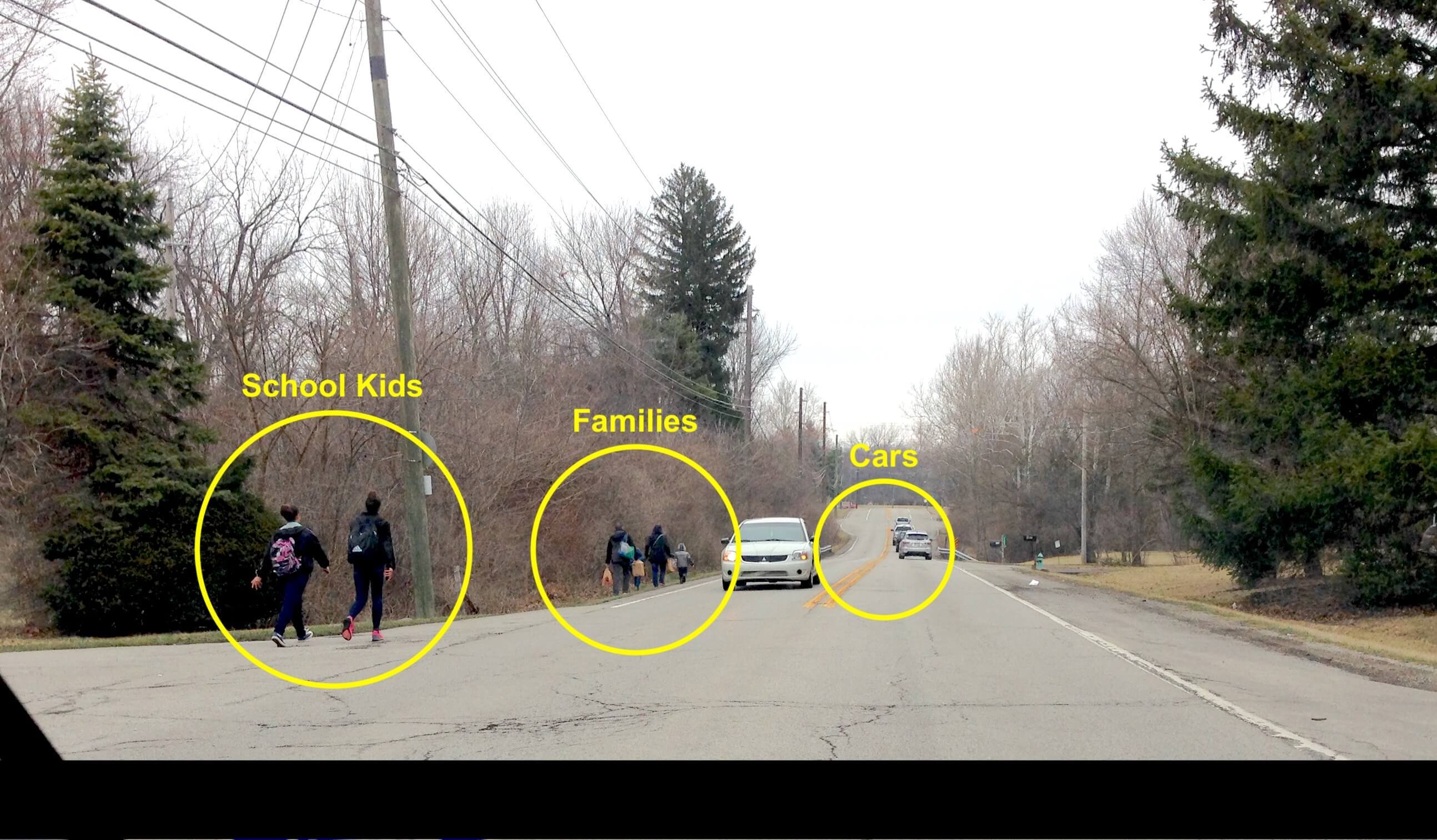 Walkable cities contribute to people’s overall health, safety, and quality of life. This study prioritizes missing pedestrian walkways to help identify where investment should be focused in Indianapolis.

Although it has some very walkable areas of town, overall Indy ranks low in nationwide surveys of walkability (Walkscore.com). Recent efforts are underway in Indianapolis to enhance walkability, as demonstrated by its recently adopted Complete Streets Ordinance and the Health By Design et.al. Indy WalkWays initiative. A large land area and limited budget require the City find tools and strategies to efficiently and effectively develop and maintain its infrastructure. This includes finding ways to prioritize the types of pedestrian infrastructure needed to enhance walkability, and the location of that infrastructure.

The map shows the results from a study of Indy’s missing pedestrian infrastructure (i.e., sidewalks and multi-use paths). It reveals the gaps in pedestrian walkways and prioritizes them based on proximity to destinations, population density, and demographic factors that may contribute to an area’s particular transit needs.

High ranking walkway segments (red and orange) would be considered among Indy’s most needed walkways.

“Missing Walkways” are shown as lines on the map where there are gaps in the existing pedestrian network. These are mapped along primary and secondary arterial roads, and collector streets hosting major bus routes, using 2014 data of Indianapolis’ existing pedestrian network* as a reference. The missing walkway segments are ranked and color-coded low (yellow) to high (red) based on their proximity to destinations combined with proximity to areas of highest population density and concentration of people who may have limited transportation options (Net Social Index). For example, segments shown in red (high priority) touch areas containing both high net population density and high scores for social indicators representing potential pedestrian infrastructure need, such as income, minority status, education, linguistic isolation, and age (2010 Census; 2013 ACS).

The scores for each segment are tallied and the results are used to rank the missing walkway segments from low to high in terms of their priority for future development. High ranking walkway segments (red and orange) would be considered among Indy’s most needed walkways.

The map of “Missing Walkways” does not distinguish places where sidewalks may exist along only one side of a road, or where existing sidewalks may switch back and forth between different side of the road, nor the quality of existing sidewalks. It also does not evaluate the existence of crosswalks (another essential component to the pedestrian infrastructure). The data are not field verified. Sidewalks within neighborhood subdivisions and along minor collector streets are not considered by this study.

* Special thanks to Kevin Kastner for providing the pedestrian network GIS data used in this study and for posting on Urban Indy. See Prioritizing Missing Pedestrian Infrastructure, Saligoe-Simmel (PDF) for detailed methodology and documentation of data used in the study. 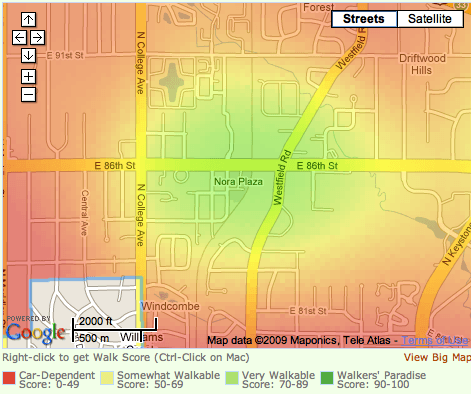 I’ve been very interested in the news stories I’ve read about neighborhood boundary data and its usefulness. About a year ago Adena Schutzberg, Directions Magazine, wrote about neighborhood data offereings and the announcement by Zillow.com that they would provide their neighborhood GIS shapefile data freely through a Creative Commons license. First of all, I am very interested to see the CC licensing being applied to geospatial data – this alone is worth following. And I applaud Zillow.com (which I love) for making their data available in this way. So I was really interested when I came across another very excellent site providing my home’s walkability score (which alas is moderately low) and my office (which is very highly walkable). Walkscore.com is a site worth visiting. “Walk Score helps people find walkable places to live. Walk Score calculates the walkability of an address by locating nearby stores, restaurants, schools, parks, etc. Walk Score measures how easy it is to live a car-lite lifestyle—not how pretty the area is for walking.” The Walk Score algorithm awards points based on distances to the closest amenity in a number of categories. I especially love the heat maps showing the most walkable neighborhoods in the top 40 U.S. cities. And certainly turn around is fair play… Zillow is already leveraging the benefits of having made its neighborhood data available (in February, Zillow.com added WalkScore to each of their 87 million properties).